Get fresh music recommendations delivered to your inbox every Friday.
We've updated our Terms of Use. You can review the changes here.

Flowers on Loan: music from the 2017 west coast tour

by Flowers on Loan 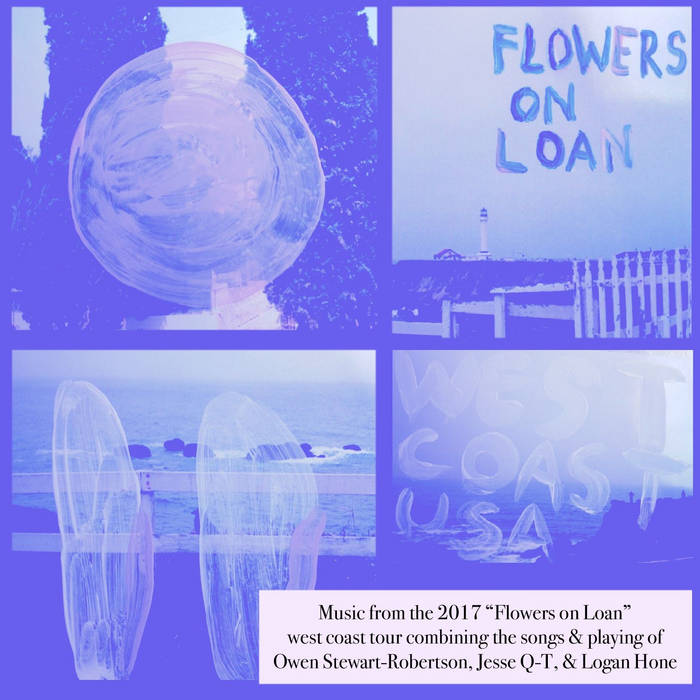 "2017-- Logan has been planning a west coast tour for a few months without knowing exactly who the band will be. This is Logan’s practice at the time. A headlong rush into making music with the materials and people at hand. It’s the day after I graduated from CalArts. I’m in a weird headspace-- I’ve been obsessing about music for the last 2 years, and I can’t really tell which way is up anymore. I’m filled with anxiety about every element of life. Logan and I rent a van, load it with the floral pump-organ cover Jessica sewed for us, and drive up to the Bay. I meet Owen for the first time. He’s very reserved and gentle, but not at all a pushover. We have no idea what music we’re going to play, and we have a gig the next day in Oakland. We teach each other songs we’ve written for other projects. It’s nice and a bit disorienting. We mold the set as we loose money at DIY show after DIY show up the west coast. In Canada, we play for 6 ppl after convincing the border guard that we were there to visit friends-- not far off. Along the way Owen clicks photos with his old (heavy?) camera, and I feel mostly sheepish when he does. A couple years later, Logan paints on top of the photos. On the way back to LA we record our set with Bly Wallantine at Studio Dada in Provo. Logan agonizes over mixing it for a couple years and finally passes it off to Luke Williams who fixes/glazes it.

It’s nice to try to write some memories from that time. 3 years have never felt so long. Here in 2020 my dad’s in the hospital getting chemo, the world’s closed down, and I have no idea when I’ll be able to go home to LA, let alone to travel for music. That tour felt like the beginning of something at the time. A pushing off from school into a world of chance and music and driving and confusing possibility. From here, it looks more like an island, a confluence of naivity and energy that led to nowhere concrete. Listening to the album we made, I do feel that surpises are possible, and that things can change."

Jesse & I live in LA & Owen lived in San Francisco at the time. So in a coordinated effort to play music together, we set up a DIY tour, each brought our own songs, got together in the Bay Area to rehearse for a few days, headed north, camped in Gualala, performed and tweaked the songs over the next two weeks, traveled up to the northwest, hopped the border to Vancouver, drove east through Idaho, and down through Utah where we recorded these songs in Provo with Bly Wallentine at Studio Studio Dada, and ended up back in Los Angeles. Jesse read a lot, Owen took many pictures, and I stayed up too late most nights.

Much love and thanks to all the freakin lovely friends that hosted us, set up shows, played with us, listened to us. Also to Juliet for the mind blowing chili oil and good times. And to Luke and Bly for their magic sound contributions.

Of the many pictures that Owen took, I later painted them. You can view them at loganhone.com/flowersonloan.html

guest vocals on "I Drove Endlessly" by Taylor Thompson

Bandcamp Daily  your guide to the world of Bandcamp